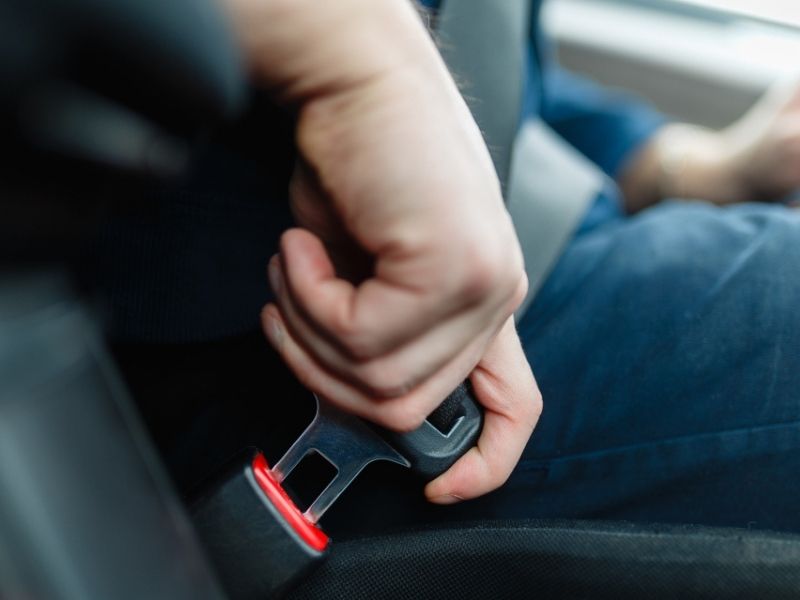 Seatbelts are one of the most basic safety features in your vehicle that you probably take for granted. In fact, putting on your seatbelt is usually the first thing you do before you even start your car. However, there was a time when cars didn’t have seat belt restraints. So, what is the history of seatbelts and how they came to be so common that buckling up is the law?

The very first person to be credited with the notion of a seat belt is Sir George Cayley. He is known as one of the most important inventors in the aeronautics field and created the very first seat belt to be used in his glider, which was the first successful manned glider in history.

In 1885, Edward J. Claghorn created the first patented seat belt to keep people safe while traveling in taxis in New York City. These seat belts were nothing more than lap straps that hooked to the car seats in order to keep people secure in moving vehicles.

As you might imagine, these added some safety but not quite enough. They could also cause complications, leading to seatbelt myths and plenty of work for any automobile defect accidents attorney in Costa Mesa as they spread across the country.

In the mid-1930s, physicians began testing the impact of seatbelts on reducing injuries that occurred in accidents. Their findings led to the implantation of seatbelts by all manufacturers. Some were as simple as ropes, while others had much better fastening capabilities.

From 1954-1955, The Sports Car Club of America and The Society of Automotive Engineers required that all competing drivers wear seat belts. They even appointed a Motor Vehicle Seat Belt Committee to ensure drivers wore them.

In 1958, Swedish engineer Nils Bohlin invented what we know today as the modern three-point seat belt. Up until this point, seat belts were still just lap belts that strapped across the lower body. Bohlin was hired by Volvo and his invention made it possible to secure a person’s lower and upper body, which greatly reduced injury during an accident.

The three-point seat belt design was so simple and effective that many other vehicle manufacturers adopted Bohlin’s design. He passed away in 2002, and at that time Volvo estimated that his seat belt design had saved more than one million lives and prevented countless injuries during the four decades since its invention.

In the United States, the importance of seat belts caught on and quickly became a safety feature in most cars. Since 1968 all American vehicles were required to have lap and shoulder seat belts as a standard feature by The National Highway Traffic Safety Administration. However, people still complained that they were uncomfortable and restrictive.

In the early 1980s, David Hollister introduced a bill that levied a fine for anyone caught not wearing a seat belt. However, this wasn’t the first attempt at a seat belt law. In 1973, the NHTSA suggested that cars be equipped with an interlock system that kept the vehicle from starting unless the driver was wearing their seat belt.

Congress quickly shut down that idea and also ruled that the seat belt reminder buzzer could only last eight seconds. It wasn’t until 1995 that every state except New Hampshire had laws stating you must be wearing a seat belt at all times when operating a vehicle, known as “Click it or Ticket.”

Today, all 50 states have laws enforcing the use of seat belts just like they do for drunk driving. Regardless, tickets are still handed out more than you might think and plenty of drivers still need the help of this felony DUI lawyer in Boulder despite what the law says. Some just never learn, but it’s a proven fact that this seemingly simple invention saves lives.

The Most Effective Way to Save Money on Auto Insurance

Where to Find Low Cost Additions for Your Personal Home Workshop